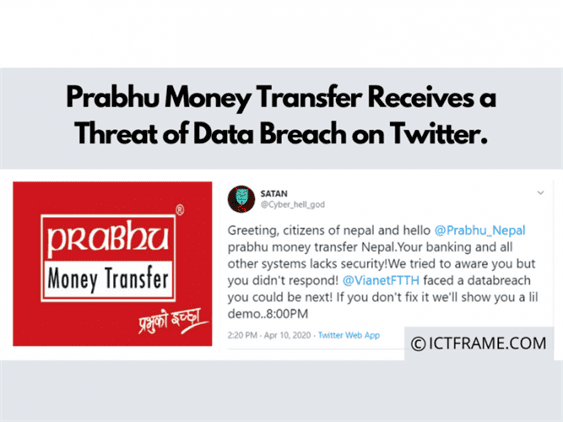 In his tweet, he said that Prabhu Money Transfer’s banking and all other services lack security. He also said to have tried to aware them of the issue but they didn’t respond. He threatened by saying that Vianet Communications had faced a data breach and Prabhu Money Transfer could be the next. He threatened by saying if they don’t fix the loopholes, he’d show a little demo at 8 pm.

We’ve presented you with his words in the tweet.

Greeting, citizens of nepal and hello @Prabhu_Nepal
prabhu money transfer Nepal.Your banking and all other systems lacks security!We tried to aware you but you didn’t respond! @VianetFTTH faced a databreach you could be next! If you don’t fix it we’ll show you a lil demo..8:00PM

If he’s really causing the data breach of Prabhu Money Transfer or not, we’ll know after 8 pm.