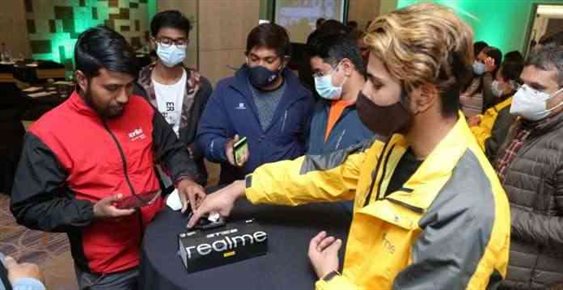 As the latest iteration of the popular flagship killer realme GT lineup, the realme GT Neo2 is a neo flagship killer born for everyday heavy users, coming with technology innovation and aesthetic design. Early adopters will get Rs. 3000 discount when buying this phone at the marked price of Rs. 54,199.

The Qualcomm Snapdragon gives the user balanced performance along with a stable experience.

A thermal gel gives the phone a cooling material. Constructing an 8-layer three-dimensional heat dissipation structure with a stainless-steel vapor cooling area of 4129mm2, realme GT neo has the largest cooling area in the history of realme phones. Considering the cooling area it offers vitality to mainstream heavy games. The applications and games load in no time.

A 5000 mAh battery supports the body which gives battery life without any pressure. The battery supports 65W SuperDart charging which charges in just 36 minutes and once it is charged it provides 33 hours of talk time, 88 hours of music playback, and 8 hours of gaming, and 24 hours of video playback.

It has a triple camera that provides clarified pictures. Considering the display it can surprise the user with the E4 display which creates the best display on realme’s smartphone.

The design of neo GT is a critical highlight of realme GT lineup. Its NEO – Green color is a combination of technology and vitality.

The realme GT Neo 2 features customers a technology innovation and aesthetics design that will surprise the customers in Nepal.

The realme GT NEO 2 will be available from the 11th of November on Daraz, interested buyers can pre-book the smartphone for an introductory price of Rs 51,199 and enjoy the Daraz 11.11 benefits which include vouchers and bank discounts.