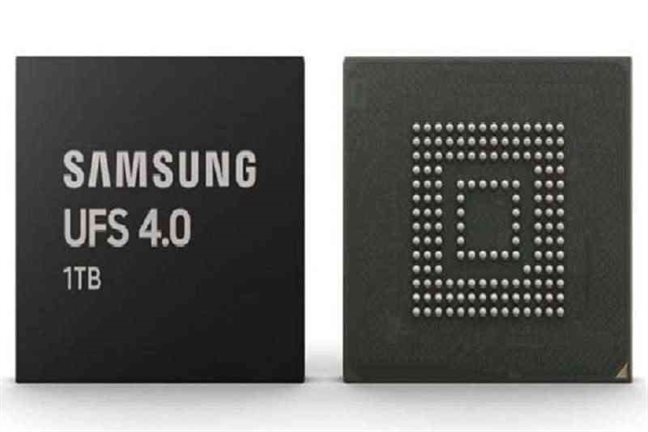 While the storage capacity of a smartphone is one of the most essential selling aspects for a consumer, the kind of storage is sometimes disregarded. Most Android smartphones (and many other electrical devices) use UFS (Universal Flash Storage), and most flagships now include either 3.0 or 3.1 UFS storage.

Samsung has announced the adoption of UFS (Universal Flash Storage) standard 4.0, which implements the most recent JEDEC standard specification.

Samsung UFS 4.0 uses Samsung’s Gen 7 V-NAND memory and proprietary controller to provide sequential read and write speeds of up to 4,200 MB/s and 2,800 MB/s, respectively. In addition, as compared to the previous generation, the new storage technology will provide a 46 percent increase in power efficiency in sequential read rates.

However, the enhanced performance does not imply larger package sizes, since UFS 4.0 will be delivered in tiny packages with a maximum dimension of 11 mm x 13 mm x 1 mm for more effective space usage and design convenience- with handsets equipped with 512GB and 1TB capacities.

UFS 4.0 offers up to 23.2Gbps per lane, which is twice the speed of UFS 3.1. This level of bandwidth, according to Samsung, is “ideal for 5G devices demanding massive quantities of data processing,” and the company expects the technology to be used in VR, AR, and automotive applications.

Samsung anticipates mass production of UFS 4.0 storage to begin in Q3, so we may expect to see the new technology on smartphones towards the end of the year, or on the Galaxy S23 series, which is expected to ship in Q1 of 2023. Read the whole Twitter conversation to learn more about Samsung’s UFS 4.0 announcement.

The next Samsung Galaxy Z fold 4 and Galaxy Z Flip 4 are likely to have UFS 4.0 storage technology. Furthermore, next year’s Galaxy S series smartphone may possibly include UFS 4.0 storage. Apart from smartphones, UFS 4.0 will be used in AR/VR devices and the automotive industry in the future.