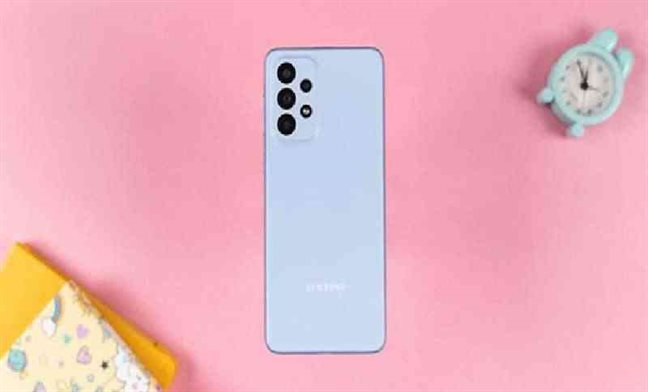 Samsung continues to expand its Galaxy A-series with new mid-range smartphones. Samsung unveiled the Galaxy A23 in the A-series on 1st April 2022.

Samsung Nepal has reduced the price of the Galaxy A23 4G in Nepal less than a month after its official launch.

In this article, we dive through the latest official price of the Samsung Galaxy A23 in Nepal, along with the full specifications and features.

The Samsung Galaxy A23 features a 6.6-inch TFT 90Hz LCD screen with a 20:9 aspect ratio. It has a Full HD resolution. Furthermore, it is protected by Corning Gorilla Glass 5.

In terms of design, the Samsung Galaxy A23 is an update to last year’s A22. It has an identical design language, multiple color variations, and a stylish design.

It now has a rectangular camera setup instead of a square camera module.

It is also available in four different colors: black, white, blue, and peach. However, the Peach color version is not available in Nepal.

The device weighs 195 grams and has a thickness of 8.4mm with an 83% screen-to-body ratio.

In terms of memory, it comes in two variants 4/64GB and 6/128GB. Furthermore, the smartphone features a dedicated microSD card slot

Similarly, the smartphone boots Android 12 on top of OneUI 4.1.

The Samsung Galaxy A23 has a quad-camera setup at the back. It is powered by a 50MP main sensor with an aperture of f/1.8 and PDAF support.

This is accompanied by a 5MP ultra-wide sensor along with a 2MP telephoto macro camera and depth sensor each.

For better night photographs, the gadget has an LED flash. The device can record videos with a resolution of up to [email protected] and [email protected] On the front, there’s an 8MP sensor with the ability to record 1080 films at 30fps.

Moving on, the system is powered by a large 5,000mAh battery pack with 25W fast charging. An accelerometer, gyroscope, proximity sensor, and compass are among the other sensors.

Samsung Galaxy A23 Price in Nepal and Availability