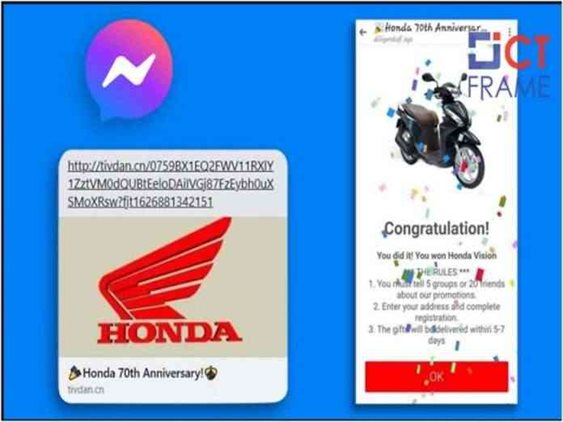 Japanese car and motorcycle maker Honda’s 70th-anniversary greetings message link is currently being spread on Messenger. After clicking on the link, some rules are put along with the message that the scooter will win a gift.

The message with the link should be sent to five groups or at least 20 people and their address should be registered. After that, it has been mentioned that the scooter will be delivered within 5 to 7 days. But you should not follow any of these rules.

Such messages may not cause immediate harm, but spammers can gain access to information related to you once they enter the link. In some cases, such messages can be a means of unauthorized access to social media, including Facebook.

However, as mentioned in the message, Honda’s 70th anniversary is not now. It was in September 24, 2018, as marked in Honda’s founding.

Three years after the 70th anniversary, there is no example of a company making such a gift public. A similar link was also seen on WhatsApp earlier saying it was Amazon’s anniversary.

The winner received a Huawei mobile message with Honda-like rules. But WhatsApp’s user base is less than that of Messenger, so it didn’t get much publicity.

Due to the large number of Messenger users in Nepal, it was possible for Honda’s Messenger link to spread easily and quickly. The terms or conditions laid down there also helped to spread it.

Malware: Malicious Software is a hacker-created program used by hackers/cyber criminals to corrupt and destroys other computers and computer systems via email/Internet and pen drives or infected computers.

Where does malware come from?

What harm can malware do?

Once malware is installed on a computer, it monitors the day-to-day activities of the computer user and encrypts all important data without the user’s knowledge and access to financially and personally sensitive data from hackers/cybercriminals. As a result, the computer system may not work.

How to stay safe from malware?