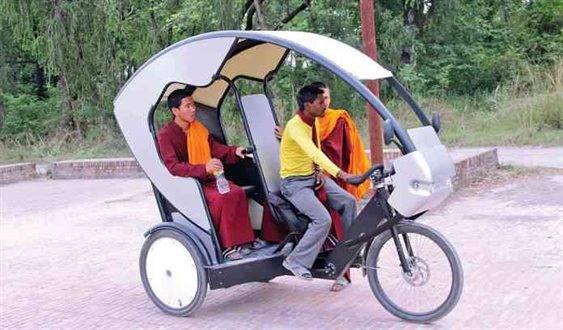 There are many big and expensive exercises being done for the Digital Nepal campaign. Such practices are becoming more and more widespread in big businesses, banks, hotels, and others. But many, even those with low investment and low incomes, are starting to adopt digital practices.

The latest example of this is cashless e-payment in rickshaws. As a practice, Rupandehi e-rickshaws have started to use QR codes. Now such rickshaw riders are not going to pay cash. They’ll pay the fare from the mobile by scanning the QR code of the rickshaw.

You may also like: NMB Bank QR Payment Service at Balkhu Vegetable Market

Talking about the campaign initiated by Nepal Rastra Bank to make the digital payment system easy and open to the public in Nepal. He said that the banks and financial institutions have shown commendable initiative in this regard.

Prakash Poudel, CEO of Shine Resunga Development Bank, said the bank would step up its drive to distribute QR cords to small investment and income-generating sectors, such as rickshaws, to take small traders to the digital age.

Ramesh Kumar Neupane, Assistant Director at the Nepal Rastra Bank Siddharthnagar office, said that the first use of rickshaws had begun in Rupendehi. While this activity had begun in some busses and taxis in the federal capital of Kathmandu.

Neupane, who coordinates such work in Rupandehi, said that the NRB Siddharthnagar office will continue to implement QR codes in small vegetables, fruit, grocery stores, and local buses in the coming days.

Hari Bahadur Nepali, president of the Rickshaw Drivers’ Association, Siddharthnagar, said that rickshaw puller and customers would gradually get used to it. But it would be implemented for all. According to him, about 250 e-rickshaws are operating alone in the Siddharthnagar district. The number of such rickshaws is also high in Butwal, Sainamin, Devadaha, and Lumbini of Rupandehi.

Rickshaw drivers from Sainamina Municipality of Rupandehi also issued QR codes on Thursday. Mayor Chitra Bahadur Karki said that the municipality is being made completely digital by distributing codes to them.

At the same time, QR codes were also distributed to small army fruit and vegetable traders.