Vianet, one of the leading ISPs in Nepal has increased its FUP quota on its unlimited internet plans. The internet service provider decides to boost the Fair usage limit by up to 60%.

People cannot go outside of their houses and cannot perform any travel-related activities during this lockdown. The demand and usage of the internet have skyrocketed since it’s a major source of refreshment, entertainment, and alternate to professional space.

Vianet’s new announcement to increase the FUP Quota is a matter of rejoicing to every heavy internet user.

You May Also Like: How Are The ISPs Industries Providing Services During The Lockdown?

In simpler words, the Fair Usage Policy is a guideline that’s followed by every ISP in the world to monitor and keep bandwidth usage in check. FUP can be considered as a defense mechanism against unjust bandwidth consumption by capping the speed. ISPs also need to buy “Bandwidth” which is exactly why there’s no “unlimited” bandwidth supply.

Providing unlimited Internet service increases the risk of a few customers abusing the service and using most of the ISP’s bandwidth. This makes it difficult for ISPs to maintain quality for other customers who have moderate usage and are paying an equal amount of money. In order to prevent this, ISP throttles or restricts speeds of customers who have excessive usage so as to maintain fair usage amongst all of its customers.

Vianet’s Fair Usage Policy is only applicable to home packages.

Usually, companies reset FUP monitoring cycles either daily or monthly. In the case of Vianet, they check for excessive usage by monitoring client’s data usage in a monthly cycle.

Data usages are calculated by adding upload and download speeds together from the start of every English month. The internet speed starts throttling at three different levels if the data usage exceeds the threshold. The internet speed throttles by 60% in level 1 of the first stage. Followed by throttling to 30% and then 10% for levels 2 and 3 respectively.

Vianet implements the new FUP quota for all of its users in different speed range. Let’s take, for instance, the new FUP limit for 25 Mbps unlimited internet starts after usage crosses 800GB data. There will be no degradation in speed until 800 GB volume usage. 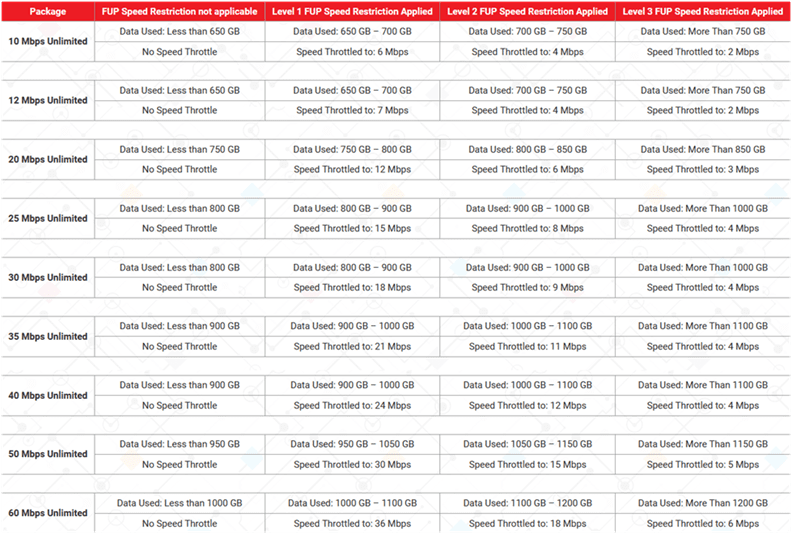 Vianet lets its customer buy additional data volume if they exceed the FUP quota. They call this feature “Ultraboost” which provides 25 GB data of 100 Mbps speed at the price of Rs 198 (inclusive of taxes).

This is beneficial for all professionals who require high internet speed while working from home.