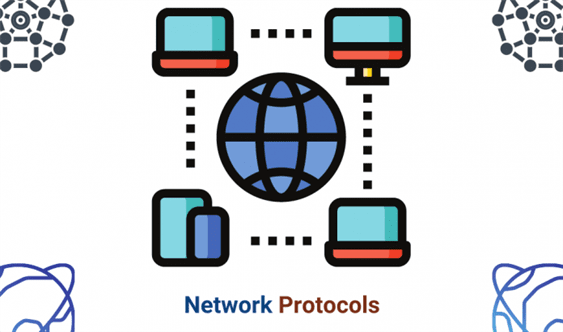 Networking Protocols are created by the technology organizations such as IEEE, W3Consortium, ISO(International Standards Organization), etc. Network Protocol plays a vital role in communicating different devices. The devices communicate through a standard network protocol within a network. These protocols are responsible for data transfer, cabling type, monitoring access methods, etc.

The Internet protocol is responsible for maintaining a stable connection between devices. Network protocols allow the network administrator to troubleshoot and fix the problems. The protocols are used for safe and secure data transfer, user authentication on a network, blocking unauthorized access to bypass the network, and other malicious activities.

Some of the major types of network protocols are explained below:

It is a set of layered protocols used for communication over the internet. The device which sends a request is the client, and the device to which the request is sent is the server.

This protocol makes sure that the data packets are sent from any source to the destination safely and securely. It is also used in many communication networks other than the  Internet.

It is used for files transfer between devices or applications. The client and the server should be connected through a network for files transmission.

It also facilitates users to download files and transfer them from one device to another on a network. To use this protocol, the client should request any file from a server. It is also used for private file sharing.

It is used specifically designed for transferring files. Files can be sent as email documents. This protocol takes a message from a client email application and sends that email to an SMTP server.

It also works with POP3 (Post Office Protocol) and IMAP (Internet Message Access Protocol) to fetch emails on the destination from the source.

It is a network layer protocol that sends data from a web server to a web client. Almost all applications use this model.

Transferring a file in the hypertext, Hypertext is parsed by a web browser. Users can easily communicate on the world wide web.

Network Protocols are generally implemented by code that sends and receives specially prepared messages over the Internet or Network.

It can also be implemented directly on the hardware, but software or code must make it work with a protocol.

Internet or network protocols govern the communication between client and server for data transmission.

Network security plays a vital role while implementing network protocols as network attacks are increasing globally in a rapid way.

Network protocols play an important role in Network security. They ensure secure data transmission and controls the activities on a network. The data are encrypted so that no one can have unauthorized access to the data.

A network defender can configure and monitor the network protocols to make the data safe and secure from various malicious activities and attacks.

As Certified Network Defender, which is highly focused on network security and defense can gain knowledge about the network and its mechanism.

Being a cyber security professional or network defender helps to secure networks and defending against various attacks.