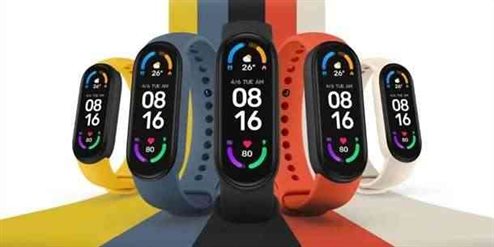 Xiaomi will unveil their newest fitness band, the Mi Band 7 in the Chinese market on May 24.

The band will be available alongside the Redmi 11T series which has been teased for a long time now.

The Mi Band series has been a global bestseller for the brand, with the company selling over 5 million units so far. In this article, we will be talking about the Mi Band 7 Specification and Availability with Xiaomi Band 7 price in Nepal.

Mi Band 7 will adopt the familiar pill-shaped design of its predecessors but with a 1.62-inch AMOLED screen up from the 1.56-inch size on the outgoing Mi Band 6. Furthermore, it has a resolution of 192 x 490 pixels. This year Xiaomi is looking to add support for Always-on Display, which will be available in select watch faces.

Xiaomi has posted a slew of teasers for Band 7, and it appears that the band will be available in a variety of color options.

The Mi band 7 is also rumored to feature an additional fitness and health tracking feature making the band 7 more capable. It includes heart rate, blood oxygen, and exercise data measurements as well as the usual mix of built-in apps for weather, music controls, and alarms. There will also be a new feature called Smart Alarm which will wake up users from light sleep 30 minutes before the actual alarm.

Likewise, Mi Band 7 could also sport a built-in GPS. Moreover, the teasers also suggest NFC support on the Mi Band 7, which would be limited to China and a few other markets.

With all of these new features, the Mi band 7 needs a bigger battery to promise 14 days of normal usage. So it is rumored that the band is going to have a 300mAh battery which is a significant upgrade from the 125 mAh battery from the Mi Band 6.

Furthermore from the rumor, the band will have a power-saving mode to preserve the battery.

Sharing the teaser poster Xiaomi is set to launch its Mi band 7 on 24th May in China along with the Redmi Note 11T series smartphones.

Whereas the price of the Mi band 7 NFC version has leaked and will be around 269 CNY. Whereas in, Nepal there’s no official news on the launch of Mi band 7 in Nepal. But it’s expected to cost NRP 6999 for the NFC version.

Last Chance to Grab The Best Dashain Offers With VIVO