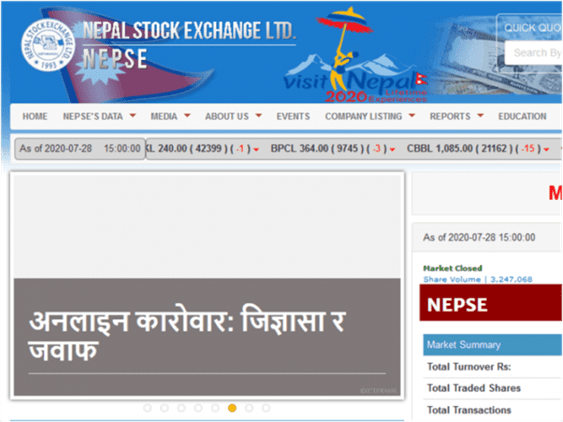 Nepal Stock Exchange (NEPSE) has recently confirmed that there have been attempts to extract a large number of details from its website using various codes.

NEPSE, the only stock exchange company in Nepal, has warned to take legal actions against those who try to block the service by establishing unauthorized access to its official website.

Company Spokesperson Murahari Parajuli said that there were delays in the display of transaction details related to NepalStock.com.np and NepalStock.com. Moreover, there was an issue due to which transactions were not visible for a certain period of time in certain areas.

A study by NEPSE found that there were attempts to extract a large amount of data from all the websites using different codes.

Consequently, there was an artificial increment in the number of people trying to view the details on the website. In fact, the company has mentioned that it is inconvenient for the general public.

The company is taking technical measures to tackle this issue. Furthermore, NEPSE has warned to take legal actions if such illegal efforts continue in the coming days.

Spokesperson Parajuli said that the site was loaded while trying to pull data excessively.

Among the culprits were Banks and financial institutes, portfolio management companies, and online sites.

For now, he said that the company has issued information for awareness. However, the company won’t hesitate to go to the police for action if it does not stop.

Is Yahoo Owned By Verizon? How Much Does It cost?