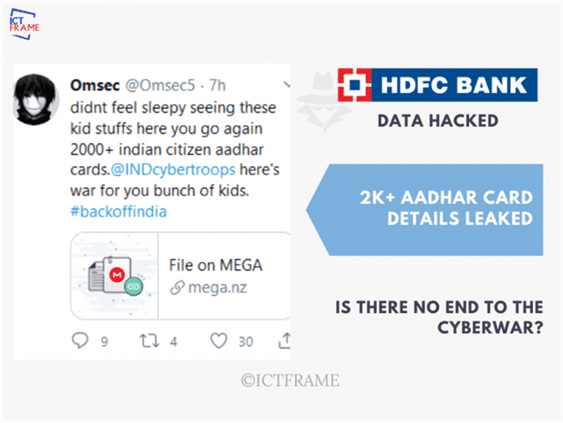 On an ongoing cyber war between Nepali and Indian hackers, an anonymous hacker @Omsec5 claims to have hacked HDFC Bank’s data. Along with the link to the leaked data, the hacker also posted a sample saying the data is from HDFC Bank’s database.

The first tweet from the hacker also mentions that more is coming: 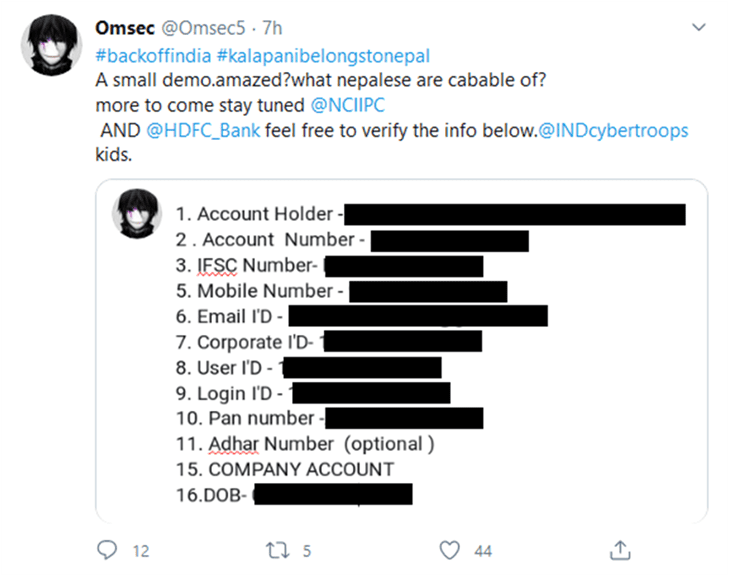 How did it Start?

The hacks on different government and non-government sites have been going on back and forth. It started with an Indian hacking group “Indian Cyber Troops” defacing the dprobanke website.

In response, the Nepali hacker “Satan” leaked the fabric’s API Key of ABPNews. Similarly, he also leaked the details of the students of the University of Ladakh. And, he claims to have attacked the database of Jalpaiguri Engineering College.

The same hacker (or group) has leaked Nepali data before such as Tribhuvan University Teaching Staff and Prabhu Money Transfer’s data.

The Indian hacker group was previously active in hacking Pakistani and Chinese sites. This is the first time they have been involved in hacking a Nepali site.

The reason behind this is the release of a new political map of Nepal. There have been many disputes before but it is the first time we are witnessing a cyberwar between Nepali and Indian hacker groups.

Cyberwar Should Have Ended

On Friday (May 22), the hacker group from India claimed that they have come under agreement with Nepali hackers to stop hacking each other’s sites. The group tweeted saying let’s not lose the brotherhood of India and Nepal over small issues and let the Governments handle everything.

However, BRAHMA did not want to stop. With the recent hack of HDFC bank data by a new hacker, the situations may worsen.

SATAN is also backing BRAHMA and claims that more is coming as it is just a demo.

It is not the first time that Nepali sites have been hacked. The only difference is that previously Nepali hackers were behind it and now Indian hackers are all over Nepali sites. The Cyber Bureau officials may be monitoring the activities but they could do nothing but watch.

We hope that both countries resolve these issues in a political and diplomatic way peacefully. The cyber war will only lead to the exchange of hateful comments and data leaks.

Read More: Cyber War Has Been Started Between Indian and Nepalese Hackers