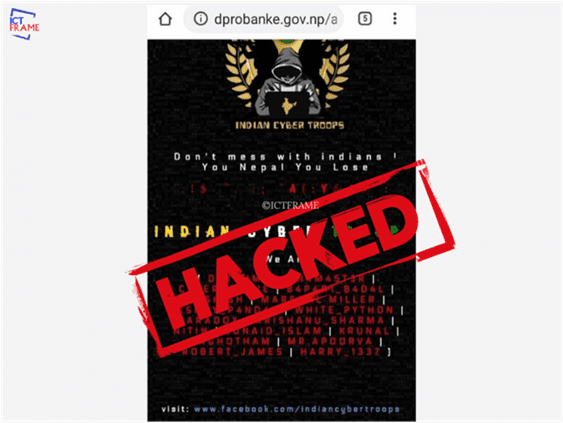 The hacker group confirmed the hack on a Facebook post with a warning claiming that they could’ve defaced the main site but chose not to. They also hinted that the reason for the hack is self-explanatory saying “Sabko Pta Hoga” which translates to “Everyone might know”.

In fact, the about page of the website was hacked and shows the texts:

You Nepal You Lose And Fix Your Map Immediately

The Research center promotes plant resources by developing sample collection, identity study, research, and technology. There seems no intention of attacking this particular site but the motive is clear.

Obviously, they are protesting the newly released map of Nepal by the Government of Nepal. India opened an 80 km road via Lipulekh, a disputed area, with Tibet on March 8. Back in November 2019, Nepal protested the inclusion of Kalapani within India’s territory on a new political map released by India.

With no real progress for the earlier protest, Nepal recently released a new political map that includes the disputed lands. The cabinet has approved the new map that shows Kalapani, Limpiyadhura, and Lipulekh as Nepali territories.

Experts claim that the release of a new map has sparkled ‘Cartographic war’ between Nepal and India. Moreover, with the hacking of dprobanke, we could be looking at the beginning of a cyberwar. Needless to say, the comment section of the post by the hacker group is flooding with disputes.