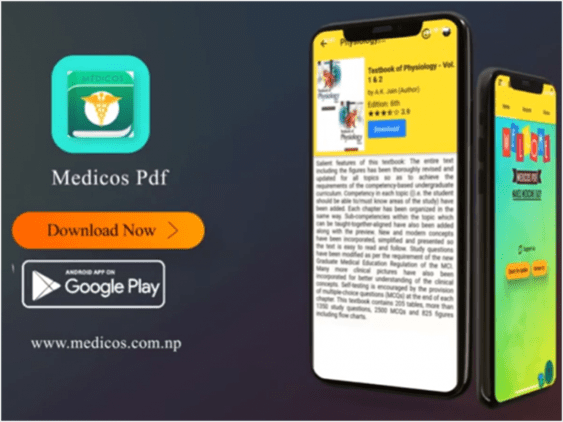 Chitwan Medical College’s Santosh Rijal was looking for a way to get rid of constantly carrying those bulky medical books and reading materials. He thought of an idea to make the books available online and created a website along with his friend Ankit Shrestha. The website was up and running for some time. Later, when it was impossible for him to sustain the website any longer, it went offline.

Although they were studying medicine, both Santosh and Ankit were really good with technology. They wanted to take this forward. Unfortunately, they weren’t able to manage time to do so.

Fortuitously, when there were a strike and protest in CMC last year, they thought about building an app rather than the website.

They contacted IT Engineer Kshitiz Dhakal and Arjun Bhandari,  who had completed MBS in Economics for the same. They now became a team of four. Finally, together they built this app – Medicos PDF!

“We had all the knowledge on what to do to digitize the medical field, but we didn’t have the time,” said Ankit,” Finally, at the same time, we launched the Medicos PDF app, which can be viewed on the Android mobile Play Store.”

They have collaborated or coordinated with the faculty members of MBBS, BDS as to knowing what to integrate into the app. Today, the app has a range of materials required for those fields. Similarly, various blogs, articles about important news related to the health/medical field are also integrated into the app.

Similarly, they have also recently launched Medicos ECG which is not just for the students but for the doctors too. This app is specially built for the cardiologists.

To date, the team has spent almost 1.5 lakhs in building the app. They feel that to full-fledged institutionalize the app, they will require a sum of almost 10 lakhs.

Their parents are helping them to some extent now. But they say that they will collaborate with other people in the medical field to take this app forward on a big scale.

According to the boys, the college administration has been appreciative of their work. But speaking financially, they haven’t provided the required push.

Regarding the validity of the content, Dr. Savin Ranabhat and Dr. Mamta Tiwari, associate professors of the college, assisted the team to put content in this app. Only after their approval, the content was put in the app.

“We have given the world a suitable option to study, but we are discussing how to make it more empowering in the coming days,” he said.

How is the app performing?

Meanwhile, Santosh and Ankit feel that the app has received great reviews and popularity in a short period of time.

Currently, there are around 100k+ downloads in  Google Play Store.

You can get the app in the play store by clicking here. Soon enough, the team will come up with the app for the Apple store too.

What do you feel about this initiative by the young minds? Let us know in the comments.

COVID-19 is 10 Times Deadlier Than Swine Flu: WHO