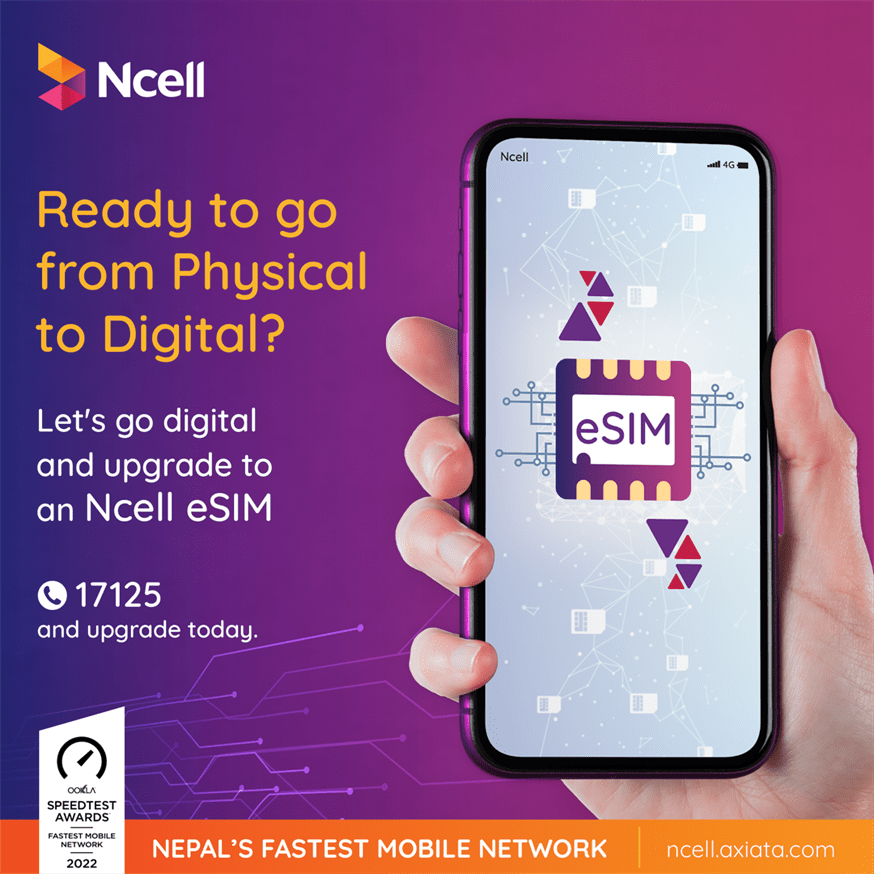 Ncell customers can now upgrade their physical SIM to embedded SIM (eSIM). Ncell Axiata Limited on Friday (November 25) announced the launch of eSIM for its customers, allowing customers to reap the benefits from eSIM on their compatible devices.

An eSIM is an industry-standard digital SIM with a small built-in chip inside the device that provides network connectivity without needing a physical SIM card. It is more secure than a physical SIM as it cannot be removed if the handset is lost or stolen.

Ncell users can request for eSIM upgrade via SMS. Customers need to type their citizenship identity number and email address and send an SMS to 17125. For example, customers should type<Citizenship ID number>comma<email id> and send it to 17125. Before activation, customers will get a confirmation call from Ncell representatives.

They will not be charged for the SMS and upgrading their SIM.

Customers can also visit their nearest Ncell Centre to activate/upgrade their eSIM. Other consumers who need new Ncell eSIM can also visit any Ncell Centre, subscribe to it by following a normal registration process, and start using the service with their desired tariff plan.

To use the eSIM facility, customers are required to own handsets or devices that support the eSIM feature. Customers can check their eligibility for eSIM by dialling code *#06#, and if Embedded Identity Document (EID) is displayed, their device is eligible for eSIM activation.

Ncell has stated that it is delighted to launch eSIM in line with its commitment to introduce new technology and services to serve its customers. The company believes that eSIM will play a crucial role in the context of the entire ecosystem development of ICT in Nepal, as connected devices are set to grow in both customer and enterprise segments.

Depending on brand and handset models, multiple numbers can be registered on eSIM. However, only one number will be active. eSIM plays a significant role in the Internet of Things (IoT) as the technology is already embedded in developed markets in cars, wearables, home appliances, and industrial machines.