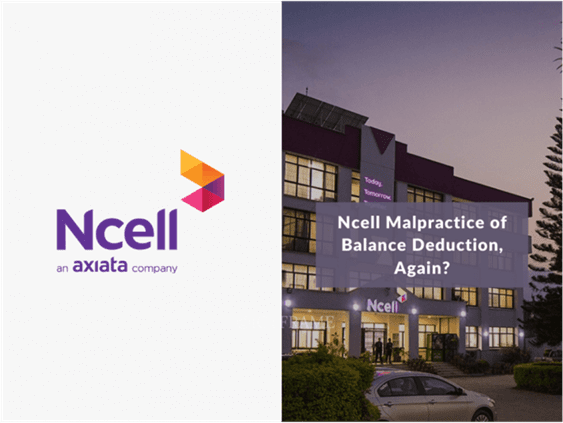 Ncell commits malpractice yet again. The case is going viral on social media. In the name of Huawei game content and business handling charges, Ncell seems to be cutting the balance of up to Rs 15.32 per day. Ncell is cutting those balances without the consent of its users. Moreover, most users are not aware of the charges.

In July 2019, Basanta K. Dahal, a Ncell user was a victim of a similar incident where Ncell cut off balance for similar services. The news went public through a popular social media page, Routine of Nepal Bandha.

Please embed this link through WordPress:

The news is surfacing again when Ncell user Chandak Nayak’s screenshot of his daily deduction of Rs 11.49 went public. This deduction was made in the name of Huawei game content.

In the screenshot, Ncell deducted 11.49 rupees in the name of Huawei Games content at 8:57 pm on Sunday. And the same amount for the second time at 1:37 pm on Monday.

After Nayak’s post on Facebook, other Ncell users are also taking screenshots saying that they are cutting money from their mobiles in the same way.

After the service users confirm on the partner’s page, Ncell’s consent page opens and the user’s subscription is confirmed by Ncell. When reconfirming in this way, it is ensured that the user has subscribed to a certain service on such a page for a certain fee.

Once this process is complete, the user has three options. There is a confirmation option in one of the options. If the user agrees to all the terms of the company, he must click on the ‘terms’ button.

The second option is ‘not now’. Clicking on it does not cut the balance. Similarly, there is another third option, ‘no action’. If you click on it, the user can exit the page. There is no charge.

You May Also Like: How Can I Transfer Balance From Ncell To Ncell?

International digital advertising agencies send digital ads to users’ handsets. For example, once users receive an ad, they will see the ads on various platforms, including Facebook and Google, after the Viber and WhatsApp calls have ended.

Ncell sends messages and notifications to third party VAT providers before cutting off balances, as well as taking action to stop such services.