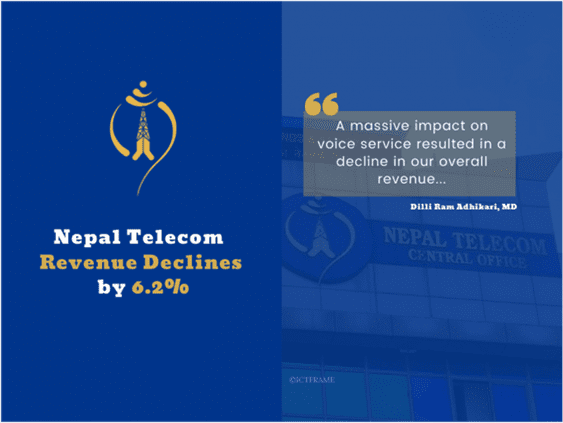 The revenue of Nepal Telecom has decreased by more than NPR 2 Billion compared to last year.

In the previous fiscal year, the company’s revenue was a total of Rs 36.86 billion. Compared to this, it has declined by 6.2 percent this year.

Consequently, it has dropped to Rs 34.57 billion.

Reasons Behind this Massive Revenue Decline

We reached out to the Managing Director of Nepal Telecom, Dilli Ram Adhikari to get some answers.

“There was a huge decline in the voice service as a result of the strict nationwide lockdown”, says Adhikari. “Voice service make up around 60-70 percent of Nepal Telecom’s revenue and the massive impact on this service resulted in a decline in our overall revenue.”

The telco had also confirmed that the revenue from leased line services and GSM data was not able to make up for the shortfall in revenue from other services.

Furthermore, Dilli Ram Adhikari claims that the company had observed a significant improvement in the mobile data sector.

However, it couldn’t compensate for the loss due to the revenue decline in voice services.

Is lockdown responsible for this?

Adhikari also gave some insight into the revenue downfall for each month since the lockdown. He said that there was an 18-19% shrinkage in revenue in Chaitra, while it was 29% in Baisakh.

The situations were slightly better in Jestha. Meanwhile, in Asar, the revenue declined by only 5-6% compared to last year.

“The decline in our revenue was seen directly proportional to the amount of impact of lockdown on our nation’s economy”, says Adhikari.

Besides this, Telecom has stated that the decline in income is also due to discounts on various services at the request of the Nepal Telecommunications Authority (NTA) during the lockdown.

The company offered a 30 percent discount on mobile data rates during the lockdown. This alone resulted in about 230 million rupees shortfall.

“We are on our way to tackle our losses and we have seen a significant amount of improvement in our revenue generation in Shrawan”, says Adhikari.

Likewise, the expansion of FTTH and 4G services are going on which will help to cover more areas. According to Adhikari, Nepal Telecom is gaining an average of 10,000 customers each day which shows promising improvements in the revenue generation model.