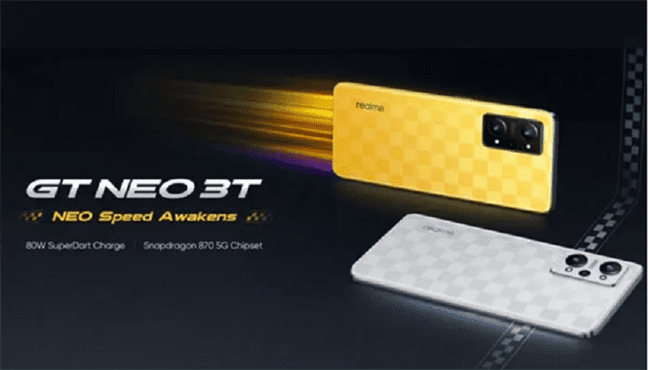 Here, we will dive through the specs, features, availability, and the expected price of the Realme GT Neo 3T in Nepal.

In terms of design, the back has a matte finish with a rectangular camera cutout and curved edges. At the front, there is a bezel-less display and a single selfie camera that comes in a punch-hole design.

In terms of memory, it comes with an 8/128GB and 8/256GB variant. The RAM used here is LPDDR5x and the storage is UFS 3.1 The smartphone does not feature a dedicated microSD card slot

Furthermore, the smartphone boots Realme UI 3.0 on top of Android 12.

The Realme GT Neo 3T has a triple-camera setup at the back. It is powered by a 64MP main sensor with an aperture of f/1.8 and PDAF support.

This is accompanied by an 8MP ultra-wide sensor and a 2MP macro sensor. For better night photographs, the gadget has an LED flash.

The device can record videos with a resolution of up to 4k at a rate of 30/60 frames per second. On the front, there’s a 16MP sensor with the ability to record 1080p films at 30fps.

There is an audio system with stereo tuning at 24-bit/192kHz. Realme GT Neo 3T does not feature a headphone jack.

Talking about the battery life, Realme GT Neo3 is powered by a 5,000 mAh battery with 80W fast charging support.