Samsung recently returned with the Note 20 and the Note 20 Ultra at the #GalaxyUnpacked event. Even though the leaks and rumors gave us a good idea about how these smartphones would turn out, Samsung managed to pull out some new features. Certainly, it was a difficult task to improve a phone that could do everything you could want and in doing, Samsung may have screwed up on the standard Note 20. So, let’s have a look at the features, specs, availability, and official price of Samsung Galaxy Note 20 in Nepal.

Note 20 is available for purchase at Samsung brand shops and retail stores all over the country.

Let’s kick off with the looks on the new Galaxy Note 20. It features a 6.7-inch flat screen, which means no curve display on this one. However, it is a Super AMOLED panel that is taller in comparison to last year’s Galaxy Note 10. Moreover, the Note 20 series have incredibly small bezels.

The display has a small cutout for the selfie camera with a diameter slightly bigger than the Note 20 Ultra. It comes with the regular 60Hz refresh rate while the Ultra variant also has a 120Hz refresh rate. Note 20 has gone with Gorilla Glass 5 instead of the Gorilla Glass Victus which is tougher and more scratch-resistant.

Enough about the display! Let’s talk about the aesthetics on Note 20. The back has a rectangular bump, quite similar to that on the Galaxy S20, that houses the cameras. The device has got a matte finish and a polycarbonate back. The Galaxy Note 20 is available in Mystic Bronze, Mystic Green, and Mystic Gray.

Note 20 has a triple-camera setup at the back with a 12MP lens as the primary lens. Accompanying it is a 12MP wide-angle lens in the middle and a 64MP telephoto lens on the bottom. The camera setup provides Dual Pixel PDAF, OIS, and a massive 30X super-resolution zoom. 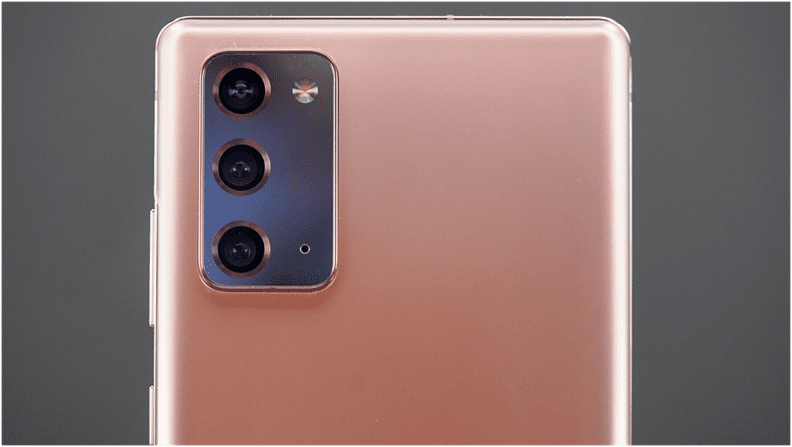 Meanwhile, the front camera is a 10MP lens that captures decent pictures and is housed inside the punch-hole cutout.

In most ways, the cameras on the Note 20 seem to be as impressive as those on the Galaxy S20 series. In fact, buyers will be able to record 8K videos @ 24fps from the rear camera, while the front camera can shoot 4K videos @ 60fps.

The Galaxy Note 20 comes with a top-end Qualcomm Snapdragon 865+chipset. A lot of improvement in the performance criteria indeed! However, the new device will ship with the Snapdragon chipset only in the US, China, and South Korea. For the rest of the world, Samsung is sticking with its Exynos chipset.

Some sources claim that Snapdragon delivers better performance compared to Exynos 990 which is why fans are complaining. Regardless, both chips are coupled with 8GB of RAM.

Similarly, there’s only one choice for internal storage which is 128GB with no SD card slot. Yes, the latest LPDDR5 memory with UFS 3.1 storage protocol but no additional storage option. We know we are bummed about that.

The S Pen has found a new home! It now slides into a slot at the bottom left-hand side of the device. And, it comes with some improvements and enhancements.

The latency has been reduced and early reviews say that it has a faster response than the previous generation Note series. Moreover, there are 5 additional gestures that work even if you scribble in the air from across the room.

One thing is clear that Note 20 owners get certain benefits, thanks to a deal with Microsoft. Users will be able to immerse themselves in the most powerful mobile gaming experience. Beginning September 15, buyers can play over 100 Xbox games free through Microsoft’s xCloud game streaming platform for 3 months.

Furthermore, you can now link the Note 20 to a Windows 10 computer and run your device’s apps on the PC itself. Also, you can wirelessly connect to a SmartTV and multitask with the advanced Samsung DeX.

The Galaxy Note 20 holds the company’s new features and enhancements, but it doesn’t quite strike as a crowd favorite. Considering the compromises, it can be seen as an affordable option in the Note 20 series.

Everything You Should Know About Nokia 6.1 Plus