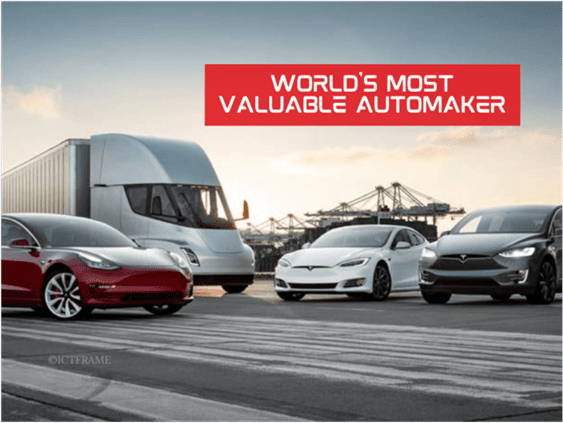 In January 2020, Tesla surpassed Volkswagen to become the World’s 2nd largest auto company by market capital with a valuation of over $100 billion.

And in just five months, Tesla is back on the news to outrace Toyota on becoming the World’s most significant auto and clean energy company by market capital! Tesla today stands at a market value of $190 billion, whereas Toyota’s market valuation stands at $182 billion. This means Tesla’s valuation almost doubled in less than six months, which is at a fast rate!

So what is Tesla planning next?

Tesla is now planning for volume production of its most awaited commercial truck, the Tesla Semi. Besides, it was also reported that the Semi was only delayed so far because of the Battery for its sizeable electric motor. The Elon Musk Company believes that once the Battery for Semi is produced in mass, the Semi productions will include volume up.

Semi is not complex to manufacture as compared to any everyday car. Therefore, its volume production will be swift!

To make the news more enjoyable, we’ve come to know that Tesla will be producing the Battery and powertrain at Gega Nevada!

Previously, in 2017, the company had announced the launch of Semi, which could 500 km in a single battery. However, it was later announced that the production of Semi would only start from 2021. But it seems like Tesla likes to surprise the universe. It will begin with the volume production before 2021!

The excitement doesn’t end here; Tesla’s Cybertruck and Roadster are also on their way to hit the roads. Despite its uncanny design of the Cybertruck, it already has more than 500,000 reservations! Tesla’s futuristic designs and features of auto-pilot, every eye is on these new models!

You may also like Best Electric Cars in Nepal.

Similarly, the sports machine Tesla Roadster is all set to release around 2021. The hypes are real for this product as well. Tesla also teases that Roadster might not need a key to start the car!

Meanwhile, it will be exciting to see how Volkswagen and Toyota plan to outsell Tesla. Or maybe we will have other tech giants like Google or Apple joining the game. You never know!

Upcoming Cruiser Bikes in Nepal, Buy Now or Wait for Your...