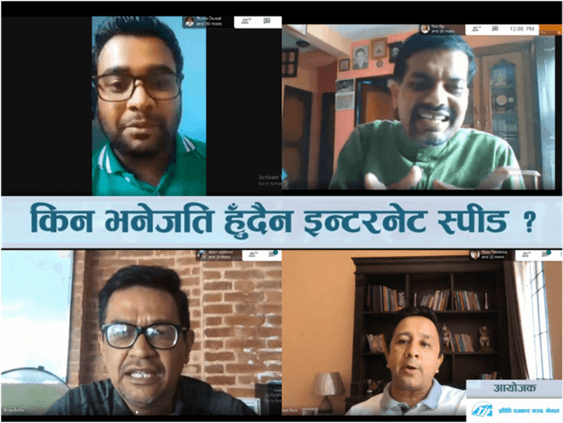 Speakers for the event were esteemed names in the telecommunication sector of Nepal:

The webinar covered all the common issues of the customers regarding slow internet connections. Also, the representatives of private ISPs in Nepal gave proper insight into the cause of the issue.

What is actually the reason behind the low internet speed?

According to the speakers, there is more than one reason. Binaya Saud took his time to explain his perspective of Quality of Service (QoS). He said that quality is something that service providers need to continuously improve. Sometimes, there are issues with providers that result in bandwidth congestion and others.

Similarly, there are several issues at the customer’s end according to him. Network congestion is increasing with the increment in wireless service customers. Thus, Binay Saud suggests the use of a better router or access point. Furthermore, he hinted towards the increment in the usage pattern since the lockdown which has also brought challenges for ISPs to improve the QoS.

Meanwhile, Binay Bohora frankly admitted to this issue being permanent.

“This issue will never go away as long as there is the internet. The Internet is just a best-effort network. It has been on a rising trend which has led to the depletion of IPv4 as well,” he said.

In the webinar, Anand Raj Khanal gave valuable input with his experience. He said that consumers are allowed to complain but ISPs can only do what they have control over. There are also some basic things about internet consumption and device connections that customers need to understand.

TikTok has caused stress in Bandwidth

Adding to the low internet speed issue in recent times, Binay Bohora said that big players like Google, Facebook, and others have been dominating the internet.

“We try our best to manage cache server for Google and whatnot and there comes Tiktok with its booming popularity,” said Binay Bohora. “So, we are caught in the middle of this trying to manage traffic for such platforms. ISP is just a dumb pipe between consumer and content originator.”

In response to the availability of cache servers, he says that countries like Nepal fall low in priority for such platforms. This is the reason why managing traffic for viral applications is slower in Nepal.

Binay Bohora further said that there is no telling what will be the ‘next TikTok’. So, this issue will arise again but it is uncertain what will cause it and when.

Similarly, Binay Saud said that bandwidth requirement increased tremendously due to Tiktok and Subisu tried to manage it with the existing bandwidth the company had. However, the company had to add more bandwidth.

As a solution, he said that CDN (Content Delivery Network) has finally arrived and with server caching, the issue of internet slow down due to TikTok will solve within 3-4 days.

As per the existing issue of lower internet, as promised in packages, both ISP representatives admit that WiFi is the issue. Binay Bohora claims that 75% of customer complaints are related to slow WiFi.

Specifically, the issue is in the access points. Using better quality access points have proven to increase the internet speed and resolve the issue of customers, according to him.

However, Ananda Raj Khanal argues that ISPs can’t make such excuses since they are the ones who provide these devices in the first place. He further suggests ISPs look into this issue.

In the Q&A section of the webinar, both ISP representatives realized the need to make consumers aware of such issues.

Even we think that consumers need to know what they are actually subscribing to and how to work with ISPs to resolve any issue.

Here are the links in case you missed the live session:

What is your say on this matter?