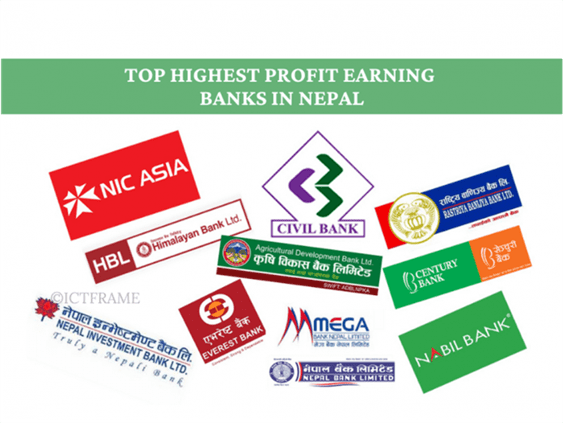 We can easily predict that most businesses have been financially affected including commercial banks of Nepal due to Coronavirus. Not to mention, the nation-wide lockdown has disrupted any financial cash flow. Amid the pandemic, we’ve come up with the list of highest profit earning banks in Nepal in 2020 so far.

As we are entering the fourth quarter of the fiscal year (FY) 2076/2077, we have compiled the list of banks which have made profit till the third quarter of this FY.

To further explain, the commercial banks of Nepal have earned Rs. 45.70 Arba in Net Profit during the current fiscal year. Similarly, in the last fiscal year, they made a Net Profit of Rs. 44.63 Arba in the first nine months. It is an indication that there has only been an increment by 2.50 percent in Net Profit compared to the fiscal year of 2076/2077.

Due to the impact of the lockdown, the commercial banks have reported a decline in their net interest income. Therefore, resulting in the fall of Net Profit of Banks such as:

Meanwhile, Banks such as:

Banks in the Billionaire’s Club

Joining the club is Global IME Bank with a solid Net Profit of 3.15 Arba till the end of Chaitra 2077. After merging with Janata Bank, Global IME Bank successfully reserved its place on the second spot of highest profit earning banks in Nepal in 2020.

Following on the 3rd spot is the Rastriya Banjiya Bank with Rs. 3.04 Arba in Net Profit. Previously in the same period, the bank made a Net Profit of Rs. 3.50 Arba.

Also read: 5 ways to use digital marketing in Banking

Banks with Growth in Net Profit

15 commercial banks are managing their growth margin despite the economic crisis. Their performance led them to remain in the highest profit earning banks in Nepal in 2020.

Global IME, the second-highest profit earning bank in Nepal in 2020 has the highest rise in profit by 68.46 percent. This includes the profit of Janata Bank as well.

After the merger with Janata Bank, the bank’s profit scaled from 1.87 Arba to 3.15 Arba this year.

Likewise, Century Bank also has an impressive record of nearly 50% growth compared with last year’s profit. In the same period last year, the bank made a profit of 61.06 crores. On Chaitra 2076, the profit was 91.57 crores.

Similarly, Civil Bank and Sunrise Bank also suffer from a decline in growth. Civil Bank’s earning in the previous year’s quarter was Rs 49.38 crores. This year, its profit earning is Rs. 36.05 crores.

Also Read: How to create a bank account online