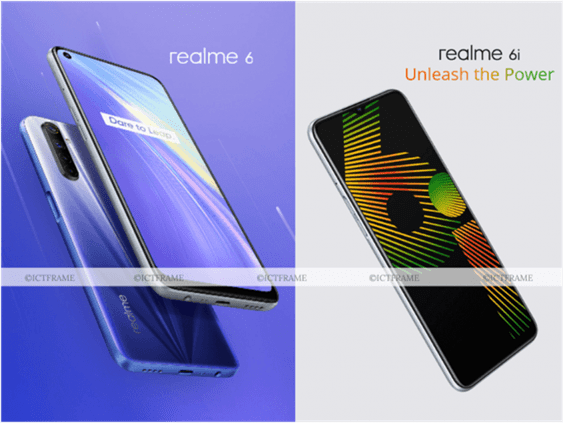 Both the devices debuted today in the Nepalese market at a worthy price for what they offer. There should be no doubt that Realme 6 is actually the successor to Realme 5 Pro. Meanwhile, the Realme 6i is that of the Realme 5i smartphone.

Let’s compare every aspect of these two smartphones from the Realme 6 series!

The Realme 6 features a hole-punch display with a 90Hz refresh rate. In fact, both are firsts for a budget Realme smartphone. It has a plastic build on a plastic frame at the back while the corning gorilla glass 3 protects the front.

The front also sports a 6.5-inch IPS LCD display with an aspect ratio of 20:9 and 1080 x 2400px resolution. Moreover, the display consists of thin bezels on the side.

The corners are rounded and the back is slightly curved at the sides, which means they are as comfortable as they come. In fact, the side-mounted fingerprint scanner is one of its key specs. If you are right-handed, you will find it absolutely natural to unlock the smartphone.

The quad-camera setup on the Realme 6 doesn’t disappoint either. It has a 64MP primary sensor with f/1.8 (wide) aperture, an 8MP secondary sensor, a macro lens of 2MP, and a 2MP depth sensor. Furthermore, its capability of capturing 4K videos @ 30fps is praiseworthy! Also, the 16MP selfie shooter comes with features such as HDR and panorama.

That’s not the end of it! We can expect features like Super Nightscape 2.0, AI beauty, and Chrome boost from the camera setup. There’s also an exciting claim to introduce video stabilizations through OTA updates – quite a news for videography enthusiasts.

Now, let’s drive your attention to its performance. Powering the Realme 6 is MediaTek’s Helio G90T, which is a gaming-focused chipset. Let us remind you that Redmi Note 8 Pro has the same chipset but odds are in the favor of Realme in terms of frame rates. In the case of Realme 6, only the highest-end variant (8/128GB) has been launched in Nepal.

Moving on to the battery, the Realme 6 packs a 4300mAh battery that supports 30W fast charging. You can very well test your faith in the fast charging advertisements that claim 100% in only 55 minutes.

Truly a masterpiece of design, the Realme 6i comes with the “Master Design”. If you’re wondering what exactly this means, it basically implies the design that improves the user experience with relation to the device and surrounding environment.

Around 6% slimmer than the Realme 6, the Realme 6i is easier to carry and looks more fashionable. Unlike the Realme 6, it has a waterdrop notch that houses the selfie camera. However, it comes with a 6.5-inch display, the same as the non-i variant.

The placement of the fingerprint sensors and the cameras bear a resemblance to the Realme 5 series. So, you get a rear-mounted fingerprint scanner on the Realme 6i. At the front, it is protected by Corning Gorilla Glass 3.

It has the AI quad-camera setup but with a 48MP camera as the primary sensor. Accompanying it is an 8MP ultrawide secondary sensor, a macro lens of 2MP, and another secondary lens of 2MP. The image stabilization on this smartphone may not be as good as in the Realme 6, but the Realme 6i does capture HD photos of moving objects elegantly.

Meanwhile, the selfie shooter is a 16MP camera with an f/2.0 (wide) aperture and mediocre video recording features. Users who are into videography may find the Realme 6 better since the Realme 6i can only capture 1080p @ 30fps.

Speaking about its performance, it is powered by MediaTek Helio G80 chipset. Just like the Realme 6, it too is available in Nepal only with the higher 4/128GB variant. The battery section shows more hope with an excellent 5000mAh battery that supports 18W fast charging.

Just by the chipsets used in the two smartphones, there is a significant gap in performance. The slightly more expensive Realme 6 has the upper edge in the gaming experience.

Realme 6 vs Realme 6i: Specifications

Realme 6 vs Realme 6i Price in Nepal, Availability